The Role Of Financial Advisors

The Role Of Financial Advisors

George Kinder reveals to Robin Powell in this video how the role of financial advisors isn’t just about helping clients with investment planning, it’s very much more than that.

I’m glad to say the fabulous relationships we have with our clients are aligned to George’s description of the type of relationship and service that Financial Planners should have with their clients.

We take the time to listen to our clients, with their best interests always at the centre of everything we do, to build a transparent and trustworthy relationship so that we can deliver the service and outcomes they deserve.

Watch the video and listen to what George Kinder has to say to UK leading financial journalist, Robin Powell.

RP: George Kinder is one of the most influential people in the global financial advice profession.

It was while working many years ago as a money manager that he realised financial advice was ripe for disruption.

Even today, he says, most clients still aren’t receiving the service they deserve.

GK: It’s very clear all the power and all the money in the industry is in the product companies, and what we think of as service providers. So, that money is geared towards profit.

Clients, in general, don’t trust… people don’t trust financial advisers. So, they think that any attempt at a genuine relationship between themselves and an adviser is likely to be manipulative; is likely to be aimed at the profit of the adviser.

RP: George is best known as the founder of what’s called the life planning movement.

GK: It’s a movement that brings focus — a fiduciary focus — to the consumer, to the client, so that it’s very clear that the client comes first. Not the products, not the profits… it’s a transparent relationship.

And what I’ve done is I’ve trained advisers to have fabulous relationships with the clients and then to build a relationship that’s so trustworthy that the client reveals what they really want out of life.

And often that’s a surprise to the client as much as it is to the adviser! And then, the adviser devises the financial programme make sure that it happens.

RP: When choosing an adviser, George Kinder says you should ensure they have your best interests at heart and that they’re good at listening.
Advisers who focus on products should be avoided.

GK: I think that most people, when they think about a financial adviser just having to do with financial matters, they’re actually the ripest candidates for being taken advantage of.

Because the people that just pay attention to finance — and don’t really care about you, don’t really listen to you, aren’t concerned about your issues — are going to be salespeople.

They’re going to be selling you on products and services.

Their main aim is making a profit for their own business. They don’t have a passionate concern about delivering you into freedom. So, if that’s what you want, then you’re pretty much asking for the potential of trouble down the line.

RP: Of course, good investment advice is important. But it’s only part of a much bigger package you should expect from a financial planner 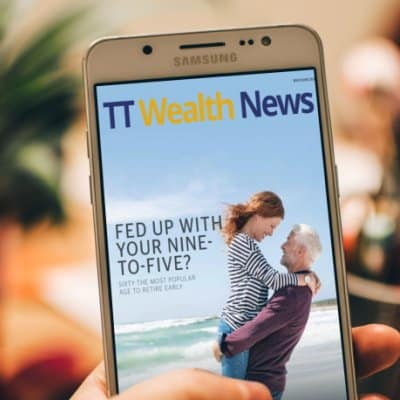 To speak to an experienced Cardiff-based Financial Adviser, contact Tony Thomas on 07585 592494 or tony@wealthmasters.co.uk